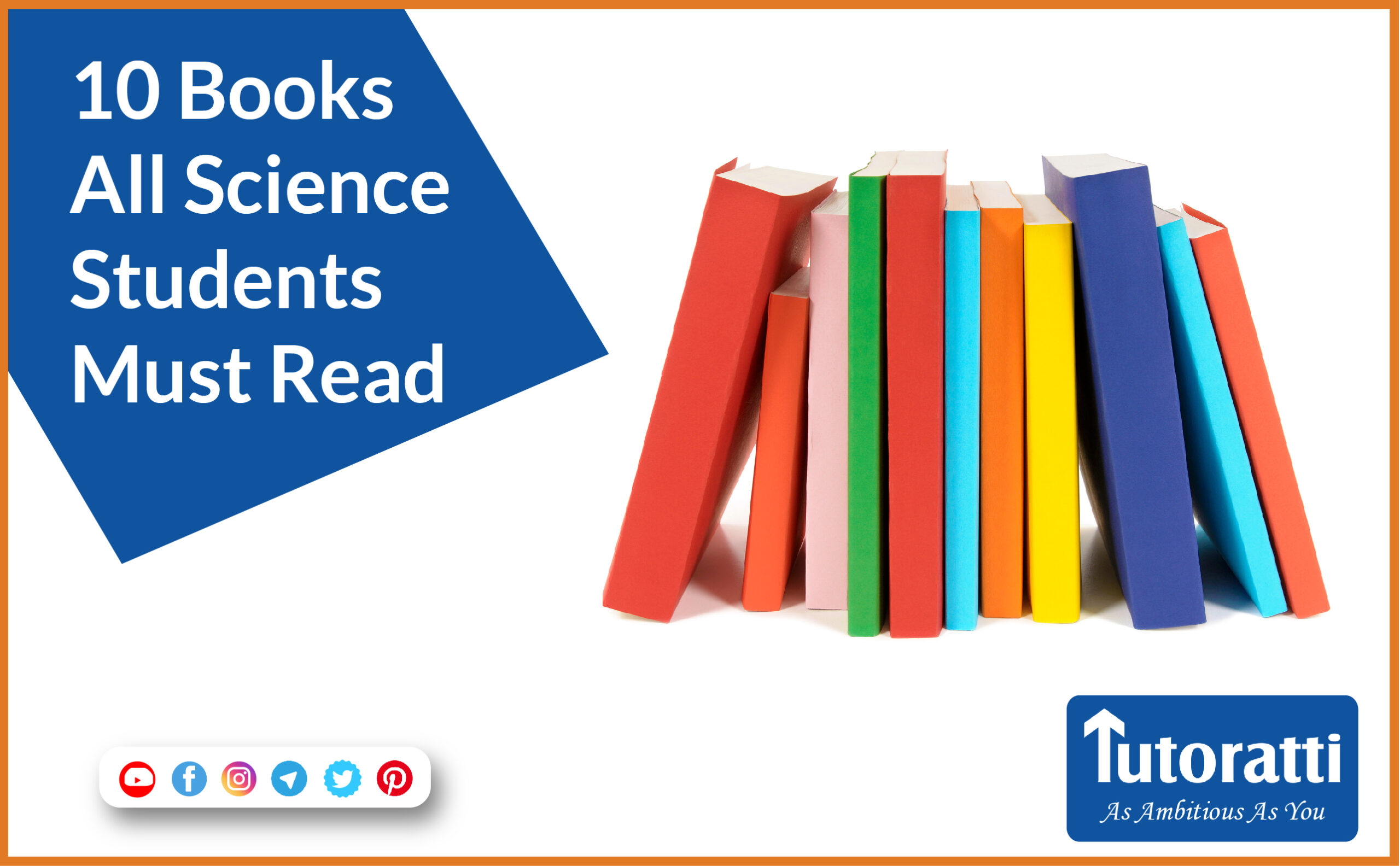 10 Books All Science Students Must Read

Reading novels may not be everyone’s cup of tea, but when it comes to books that are based on a subject you might like, it is truly important to get your hands on them. There are a plethora of books in the field of science, either written by influential scientists or based on the lives of scientists. This being said, there may be fiction and non-fiction books that make up the list of some of the best science-oriented books that you need to read, especially now that you have ample time at home before your colleges start. Whilst you are studying online, get into the habit of using your spare time to read wonderful books, not just to improve your vocabulary, but get lost in the enchanting world of science and science fiction!

First things first, having the right educational partner is extremely crucial when it comes to online learning. At Tutoratti, we believe that online coaching should be made extremely personalized and affordable since it is all set to be the next big thing in the country.  Our personalized online sessions, effective learning material, and experienced educators, all contribute to an exceptional online coaching experience that you can be a part of. Coaching JEE, NEET, CET, 10th and 12 Boards students for years together, in Maharashtra at Pune (Sinhagad Road, Kondhwa, Aundh, Camp, and Kothrud), Pimpri Chinchwad, Raigad-Panvel, and Navi Mumbai-Kharghar.

Moving on right to the top 10books you need to read as a science student, let’s check out the custom-curated list by our educators at Tutoratti!

“On the Origin of Species” by Charles Darwin

On the Origin of Species, published on 24 November 1859, is a work of scientific literature by Charles Darwin which is considered to be the foundation of evolutionary biology. Darwin’s book introduced the scientific theory that populations evolve over the course of generations through a process of natural selection. The book presented a body of evidence that the diversity of life arose by common descent through a branching pattern of evolution. Darwin included evidence that he had collected on the Beagle expedition in the 1830s and his subsequent findings from research, correspondence, and experimentation. The book was written for non-specialist readers and attracted widespread interest upon its publication. As Darwin was an eminent scientist, his findings were taken seriously and the evidence he presented generated scientific, philosophical, and religious discussion.

Marie Curie, famous for her investigations into radioactivity and the discovery of the elements polonium and radium, is one of the most well-known scientists of all time. Written by Curie’s daughter, “Madam Curie” discusses the elder Curie’s life and her passion for scientific inquiry. This work has been selected by scholars as being culturally important and is part of the knowledge base of civilization as we know it.

Factfulness: Ten Reasons We’re Wrong About the World – and Why Things Are Better Than You Think is a 2018 book by Swedish statistician Hans Rosling with his son Ola Rosling and daughter-in-law Anna Rosling Rönnlund. In the book, Rosling suggests the vast majority of human beings are wrong about the state of the world. He demonstrates that his test subjects believe the world is poorer, less healthy, and more dangerous than it actually is, attributing this not to random chance but to misinformation.

Rosling recommends thinking about the world as divided into four levels based on income brackets (rather than the prototypical developed/developing framework) and suggests ten instincts that prevent us from seeing real progress in the world. Bill Gates highlighted the book as one of his suggested 5 books worth reading for summer 2018, offering to purchase a copy for any 2018 college graduate upon request.

“She Has Her Mother’s Laugh” by Carl Zimmer

Carl Zimmer’s “She Has Her Mother’s Laugh,” which explores the ongoing revolution in genetic technology. In the book, Zimmer, one of the world’s best science journalists, explores the concept of heredity: what gets passed on from generation to generation. The book presents a history of the human understanding of heredity and how it has shaped society, chronicling the transitions brought about by genetic research and making predictions about how evolving understandings are likely to impact the future.

The “Foundation” trilogy by Isaac Asimov

The Foundation series is a science fiction book series written by American author Isaac Asimov. First published as a series of short stories in 1942–50, and subsequently in three collections in 1951–53, for thirty years the series was a trilogy: Foundation, Foundation and Empire, and Second Foundation. Asimov’s “Foundation” trilogy centers on the fall of the fictional Galactic Empire, which consists of millions of planets settled by humans across the Milky Way galaxy. Elon Musk has also said that Asimov’s trilogy proved to be an influence on his career trajectory.

This book is a tour of the great and powerful theoretical physicists of our time and exposes the fundamental problem in physics today. Whether pondering black holes or predicting discoveries at CERN, physicists believe the best theories are beautiful, natural, and elegant, and this standard separates popular theories from disposable ones. This is why, Sabine Hossenfelder argues, we have not seen a major breakthrough in the foundations of physics for more than four decades.

To escape, physicists must rethink their methods. Only by embracing reality as it is can science discover the truth. Theoretical physicists now write fantasy instead of explaining data. They develop theories that cannot be proven. As Feynman said, if it doesn’t agree with data, it is wrong. I would add if it can’t satisfy the Popper falsifiable test, it is not science.

Spying on Whales: The Past, Present, and Future of Earth’s Most Awesome Creatures by Nick Pyenson

Whales are among the largest, most intelligent, deepest diving species to have ever lived on our planet. They evolved from land-roaming, dog-sized creatures into animals that move like fish, breathe like us, can grow to 300,000 pounds, live 200 years, and travel entire ocean basins. Whales fill us with terror, awe, and affection–yet there is still so much we don’t know about them. Why did it take whales over 50 million years to evolve to such big sizes, and how do they eat enough to stay that big? How did their ancestors return from land to the sea–and what can their lives tell us about evolution as a whole? Importantly, in the sweepstakes of human-driven habitat and climate change, will whales survive?

Nick Pyenson’s research has given us the answers to some of our biggest questions about whales. He takes us deep inside the Smithsonian’s unparalleled fossil collections, to frigid Antarctic waters, and to the arid desert in Chile, where scientists race against time to document the largest fossil whale site ever found. Full of rich storytelling and scientific discovery, Spying on Whales spans the ancient past to an uncertain future–all to better understand the most enigmatic creatures on Earth.

Rising: Dispatches from the New American Shore by Elizabeth Rush

Rising is both a highly original work of lyric reportage and a haunting meditation on how to let go of the places we love. With every passing day, and every record-breaking hurricane, it grows clearer that climate change is neither imagined nor distant—and that rising seas are transforming the coastline of the United States in irrevocable ways. In Rising, Elizabeth Rush guides readers through some of the places where this change has been most dramatic, from the Gulf Coast to Miami, and from New York City to the Bay Area. For many of the plants, animals, and humans in these places, the options are stark: retreat or perish in place.

The Dialogues: Conversations about the Nature of the Universe by Clifford V. Johnson

The conversations take place all over the world, in museums, on trains, in restaurants, in what may or may not be Freud’s favorite coffeehouse. The conversationalists are men, women, children, experts, and amateur science buffs. The topics of their conversations range from the science of cooking to the multiverse and string theory. The graphic form is especially suited for physics; one drawing can show what it would take many words to explain.

Dispatches from Planet 3: Thirty-Two (Brief) Tales on the Solar System, the Milky Way, and Beyond by Marcia Bartusiak

An award-winning science writer presents a captivating collection of cosmological essays for the armchair astronomer.

The galaxy, the multiverse, and the history of astronomy are explored in this engaging compilation of cosmological “tales” by multiple award winning science writer Marcia Bartusiak. In thirty two concise and engrossing essays, the author provides a deeper understanding of the nature of the universe and those who strive to uncover its mysteries. Bartusiak shares the backstories for many momentous astronomical discoveries, including the contributions of such pioneers as Beatrice Tinsley and her groundbreaking research in the galactic evolution, and Jocelyn Bell Burnell, the scientist who first discovered radio pulsars. An endlessly fascinating collection that you can dip into in any order, these pieces will transport you to ancient Mars when water flowed freely across its surface; to the collision of two black holes, a cosmological event that released fifty times more energy than was radiating from every star in the universe; and to the beginning of time itself.

And there you have it! The absolute must-read books you need to grab if you are science student! Happy Reading!